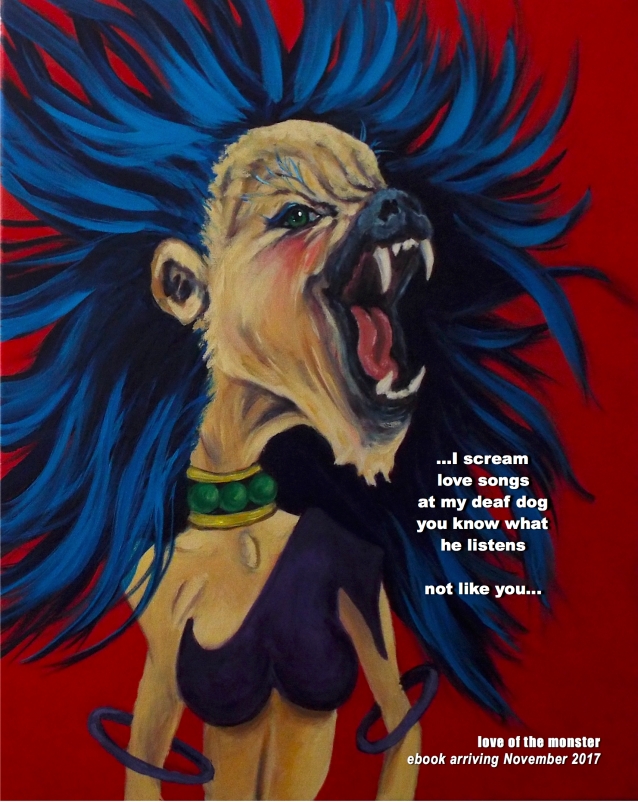 excerpt and art from, love of the monster, eBook coming soon
I’ve been swapping some drawings in print version with paintings for eBook-
because glorious color costs the same as black and white in computer land😘

just in time for Halloween

I’m honored to be included in Chicago Literati, with my flash piece, The Dipping Bread
I hope you enjoy reading, as much as I enjoy writing about vampires and their victims 😘

It happens at the Fondue Palace. Near the cheese fountain. Two lovers twirling their fondue forks suggestively. He’s been ignoring his inner voice all evening. “Something is very wrong with your date, John.” The very same voice that hours before implored him to make an escape out the backdoor. Get out before it’s too late. Too late.
Suri’s sultry eyes are vacant things. John can’t gaze into those shining black planets orbiting his date’s face. He turns away from the closeness of her flawless skin. She giggles and flicks her tongue into John’s exposed ear. He laughs nervously. He senses a curious warm spot on his cheek.   Crimson droplets appear on the dipping bread.  His hand touches his face and traces the warmth down to his neck. The wetness tints his fingertips. He slides his thumb and middle finger together. Then apart. His eyes focus on what he sees. He’s unable to wrestle out the weak cry pinned behind his gum-line. Other unwitting customers continue gleefully stabbing at bread cubes. Drowning baked dough in pots of hot liquified cheese.

No words will leave John’s chained voice. Suri’s fondue fork finds her date’s palm. She guides the two-pronged metal, like a serpent’s fangs, along the meat of John’s hand then sweetly plunges the sharp points into his flesh. She guides his limp fist up to her wine-colored mouth. Her satin skin smells like ancient ice. A burning sensation shoots from John’s brain to his groin. An explosion unlike any erotica he’s ever experienced.

Suri’s slim, powerful hand slides beneath John’s shirt. His sweating back is buckling. She holds him up effortlessly with a polished finger. John clenches his jaw. His uninjured hand reaches around his date’s cool neck. Forceful and swift–he pulls her face to his. He kisses this “woman” in a manner unfamiliar to his own lips. Their mouths sucking like uncontrolled siphons. Lightning between his legs. Shockwaves ripple inside his thigh muscles. Metallic saliva flows back and forth between their twisting tongues. Cold bliss blankets John’s dying instincts.  It’s blood, John.   It’s blood. 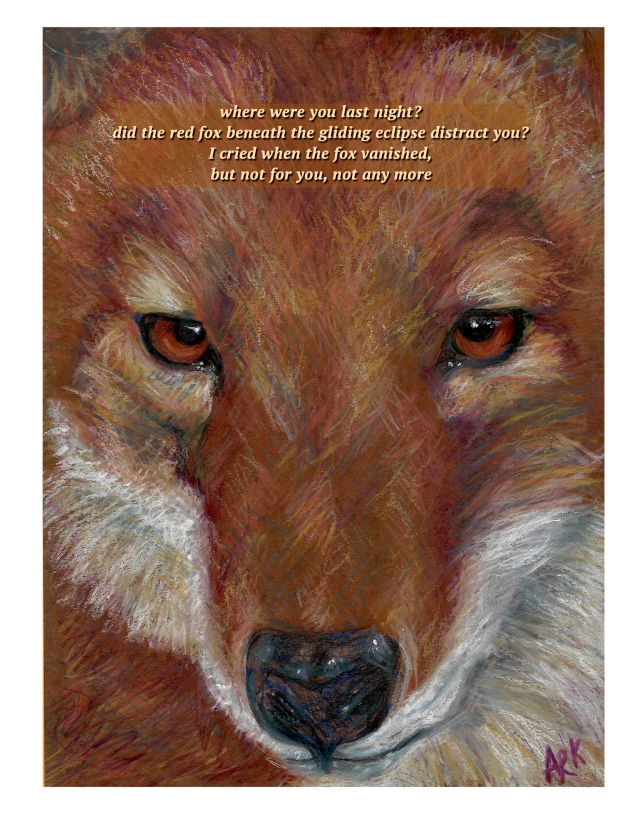 we weren’t destined to meet
a black bottle, a few flowery touches and
cold cubes that mimicked hot dice
rolled a bet with just enough scratch
for a room with bad lighting
our frantic hands
stripped away more than labels
our hungry mouths
fashioned words on stained cotton
our entwined legs
beat on dark motel velvet
but a new day’s integrity
revealed our imperfect forms
stale breath buried any lingering hopes
you were in it for the quick sale
I was in it for the everlasting bargain
we were at best
a performance piece
with no curtain call

you know what hurts
besides hitting the bold key by accident
knowing
he will never love you
too many of ‘those’ women
prancing the inside lane
you’re not even allowed near the thoroughbreds
at best, you’re a mudder –
on a good day
if he enjoyed plowing the fields
and sweating under winter’s sun
he might appreciate your broad shoulders
wide wrists
and footsteps that echo 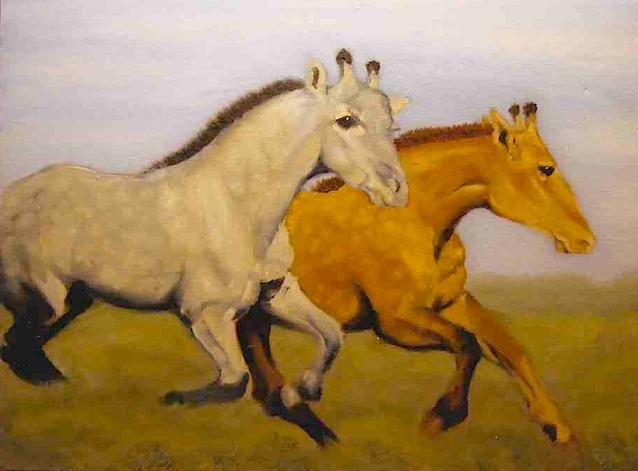 horses, giraffes – who knows – painted for an exhibit long ago entitled, “Creatured”