just in time for Halloween

I’m honored to be included in Chicago Literati, with my flash piece, The Dipping Bread
I hope you enjoy reading, as much as I enjoy writing about vampires and their victims 😘

It happens at the Fondue Palace. Near the cheese fountain. Two lovers twirling their fondue forks suggestively. He’s been ignoring his inner voice all evening. “Something is very wrong with your date, John.” The very same voice that hours before implored him to make an escape out the backdoor. Get out before it’s too late. Too late.
Suri’s sultry eyes are vacant things. John can’t gaze into those shining black planets orbiting his date’s face. He turns away from the closeness of her flawless skin. She giggles and flicks her tongue into John’s exposed ear. He laughs nervously. He senses a curious warm spot on his cheek.   Crimson droplets appear on the dipping bread.  His hand touches his face and traces the warmth down to his neck. The wetness tints his fingertips. He slides his thumb and middle finger together. Then apart. His eyes focus on what he sees. He’s unable to wrestle out the weak cry pinned behind his gum-line. Other unwitting customers continue gleefully stabbing at bread cubes. Drowning baked dough in pots of hot liquified cheese.

No words will leave John’s chained voice. Suri’s fondue fork finds her date’s palm. She guides the two-pronged metal, like a serpent’s fangs, along the meat of John’s hand then sweetly plunges the sharp points into his flesh. She guides his limp fist up to her wine-colored mouth. Her satin skin smells like ancient ice. A burning sensation shoots from John’s brain to his groin. An explosion unlike any erotica he’s ever experienced.

Suri’s slim, powerful hand slides beneath John’s shirt. His sweating back is buckling. She holds him up effortlessly with a polished finger. John clenches his jaw. His uninjured hand reaches around his date’s cool neck. Forceful and swift–he pulls her face to his. He kisses this “woman” in a manner unfamiliar to his own lips. Their mouths sucking like uncontrolled siphons. Lightning between his legs. Shockwaves ripple inside his thigh muscles. Metallic saliva flows back and forth between their twisting tongues. Cold bliss blankets John’s dying instincts.  It’s blood, John.   It’s blood.

I listened last night
cresting waves
you
a ship
the gymnasium floor
covered in ocean blue and harvesting gold
home advantage
there you were
every time I closed my eyes
imagining the sea
rather than watching you twist and be twisted
my heart opened them
I must be like you
brave
put myself out there
on the mat
face my fear, my folly, my foe, my friend
when did you become so you
my son
the little boy
I must one day
release into a hard world
with no soft wrestling mat beneath
should you fall 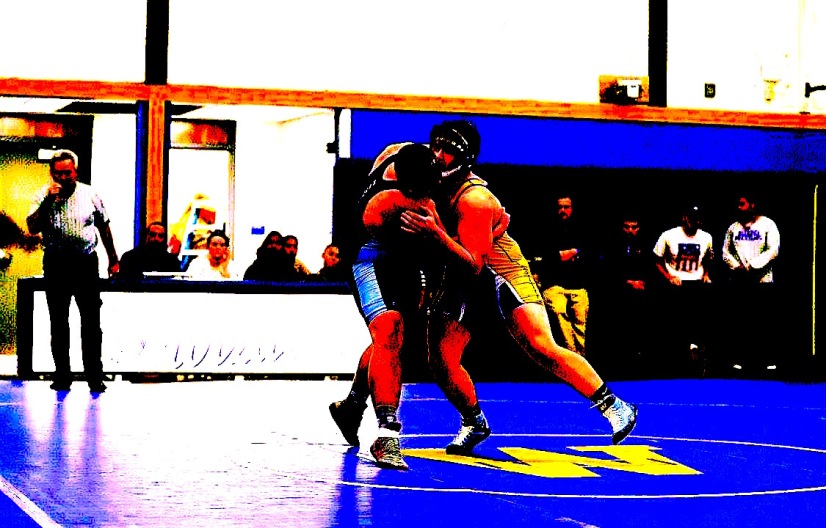 my max is on the right, gold-stripe
so very difficult watching these wrestling matches
hoping none of these kids get hurt
but they do
must keep my eyes open

want it bad?
it’s deep down
you might reach it
crawling on hands and knees
’til they bleed
stumble through the deafening black
clawing and scraping at the tight walls
fingernails ripping off
the tunnel
doesn’t use up life
it just takes time
yours
a beastly eternity
if you make it all the way
shield your eyes
get back on your feet
the light is blinding
but fragrantly warm
now suck in that lucid sky
there’s not much time
the next shadowless passage
is just over
the horizon

quickie sketch, was going to do a whole tunnel concept – truth be told – housecleaning day – damn 😉 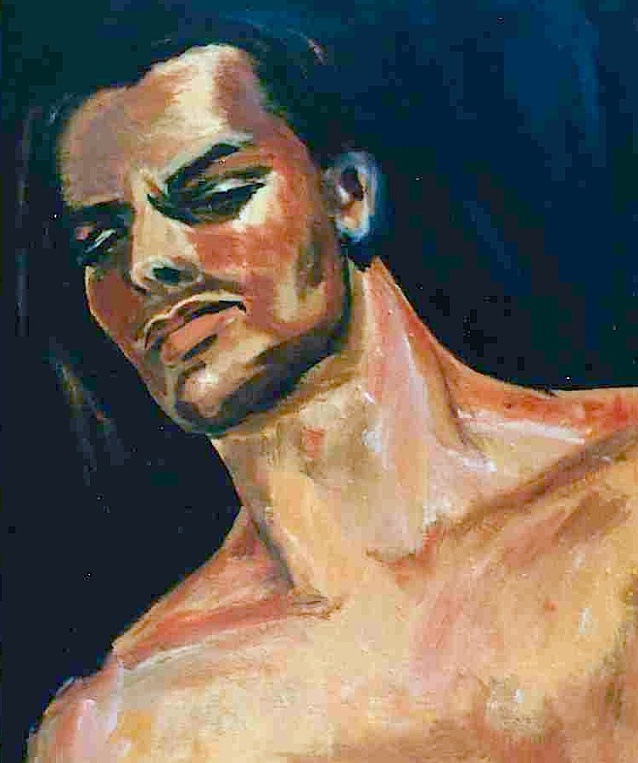 another painting from yesteryear

My Friends,
This blog of mine has been through several iterations. While returning from a self-hosted site back to WordPress, many older posts were lost in translation. I’m going to use Sunday evenings to rework, repair and repost some of my favorite 2014 efforts. I hope you don’t mind blogging down Memory Lane with me. If you haven’t read before, I hope you enjoy.
Thank you,
The ‘Annagement’ (sorry couldn’t resist)

Returning home from a lovely garden journey, the giant husband and I happened upon an old-timer’s flea market. A pair of cigarette-smoking, timeworn vendors stood outside like cement lions. They wore pensive smiles while observing curious browsers.

The market’s outdoor portion consisted of a few makeshift tables loaded with lopsided frames, 1950’s tools, hat boxes… The indoor portion was housed in a dilapidated and dank-smelling barn that had seen better days. The giant husband and I strapped on our big-boy coveralls and entered the jittery building.

Beside the usual flea market fare of old records, fringed lamps, mildewed books, chipped dinnerware and broken Tonka toys there were boxes of dead dolls. I can’t think of anything more blood-curdling than little plastic people. Dolls used to scare the crap out of me when I was a kid, now they were back to haunt me. 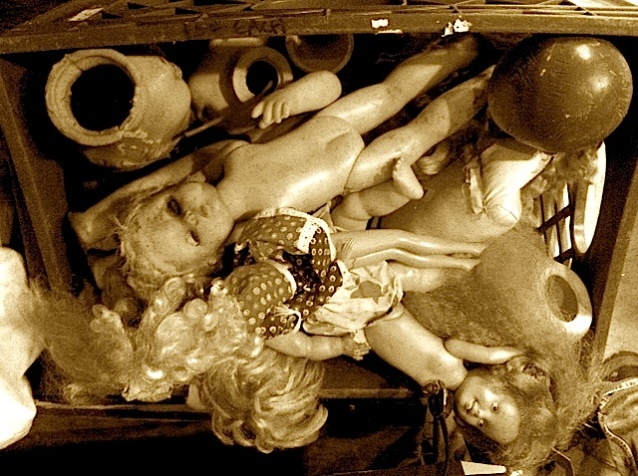 These dolls were broken-hearted. Their tiny scratched lips whispered how long they’d lived without a warm embrace.

They’d been abandoned then forgotten…

The dolls choked on satin visages of yesteryear. Long ago, they’d been precious… 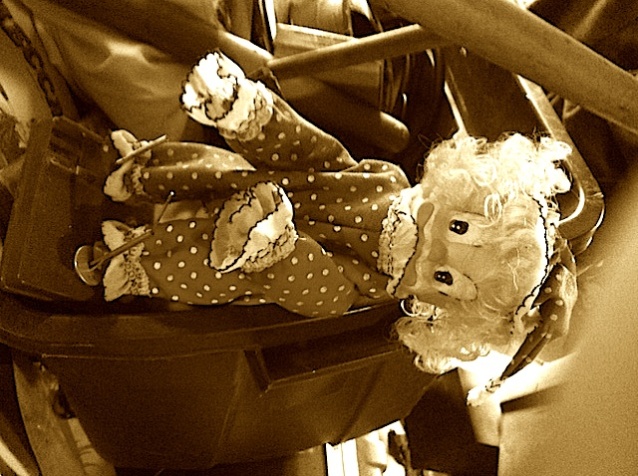 The giant husband and I had to look away from the pained grimaces.

Thank you. May you dream of happy dolls in warm homes.
All photos taken in April 2014 with iPhone. I’ve made it a personal goal to attempt art for every post, some earlier posts in 2014 have only photos.